If you are not yet a participant but are interested in joining, please visit Get Involved/ Participate.

Do not come to UCSF if you feel sick. Contact the research staff to reschedule or cancel your visit.

UCSF’s top priority is public health. This includes the health of research participants, UCSF personnel, and the broader community. Some clinical research activities are resuming in accordance with state and local Public Health ‘shelter-in-place’ orders. You can postpone any planned clinical research if you are uncomfortable coming onsite or meeting with research staff due to the COVID-19 outbreak.

Participants visiting UCSF must comply with the following basic guidelines for all of our safety:

For more information consult the CDC guidelines for COVID-19. 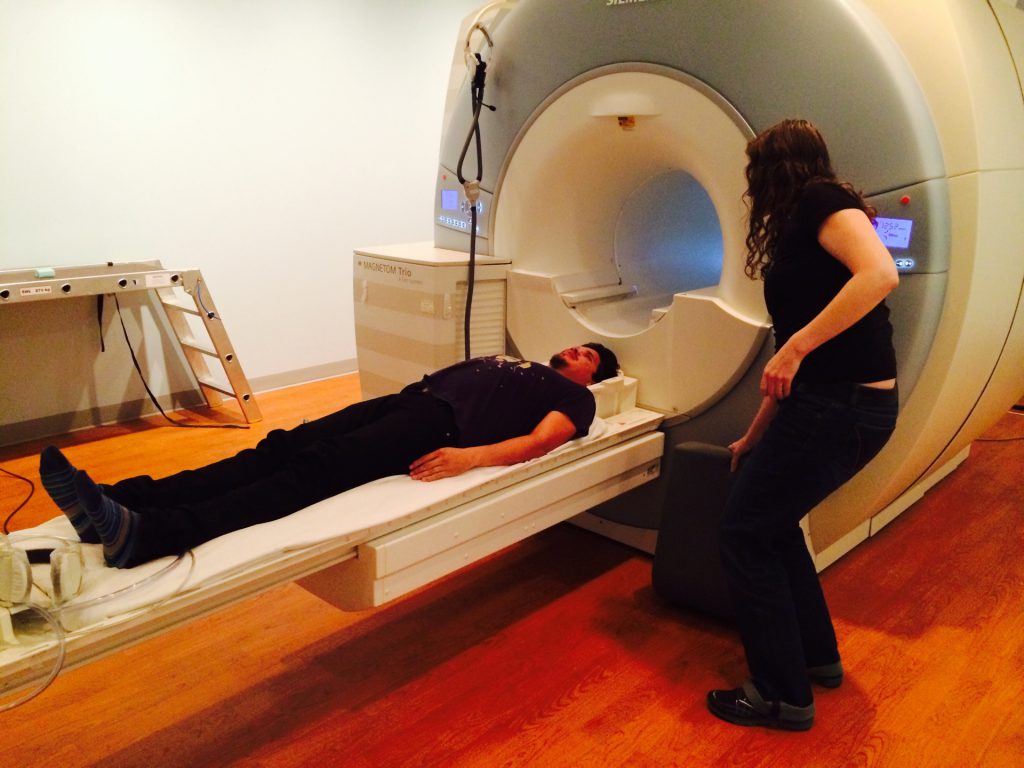 What is an MRI?

What is MRI and how does it work?

Magnetic Resonance Imaging (MRI) is a noninvasive, usually painless method of looking inside the body. Unlike X-Ray examinations or Computed Tomography (CT) scans, MRI does not use ionizing radiation. Instead, it uses radio wave pulses in combination with a strong magnetic field to produce a clear picture.

Our body is, in large part, composed of water. When a person goes inside a powerful magnetic field, protons in the water molecules align along the direction of the field. As you lie inside the MRI unit, special transmit coils send radiofrequency pulses to the area of your body being studied. These pulses knock protons out of alignment, causing a release of energy at a frequency that can be detected by the scanner’s receive coils. For greater accuracy the coils need to be placed very close to the body. The position of protons in the body can be determined by applying additional varying magnetic fields. A computer then processes the signals and generates a series of images each of which shows a thin slice of the body. The image of the whole part is thus built up over time by varying these fields. Different tissues produce different signals and can be differentiated on a reconstructed image.

Functional Magnetic Resonance Imaging (fMRI) is a technique of measuring brain activity, specifically looking at blood flow changes to different areas of the brain. Areas of the brain that are in use require more oxygen and thus demand more blood. fMRI can therefore be used to ‘map out’ which parts of the brain are being recruited to perform a specific task.

As with traditional MRI, the subject lies still on a table, but also performs a “thinking” or “physical” task while the imaging is taking place. Depending on the nature of the study, the experimenter might also need to collect eye tracking and autonomic data (eg., heart rate, respiration, skin conductance) during a scan. Usually subjects are asked to respond to either visual or auditory cues, but studies have been done with olfactory and tactile stimuli as well.

The MRI scanner is a large cylindrical tube surrounded by a circular magnet. You will lie on a moveable examination table that slides in and out of the center of the magnet.

The control station is located in a separate room, but is equipped with a window to monitor you at all times. 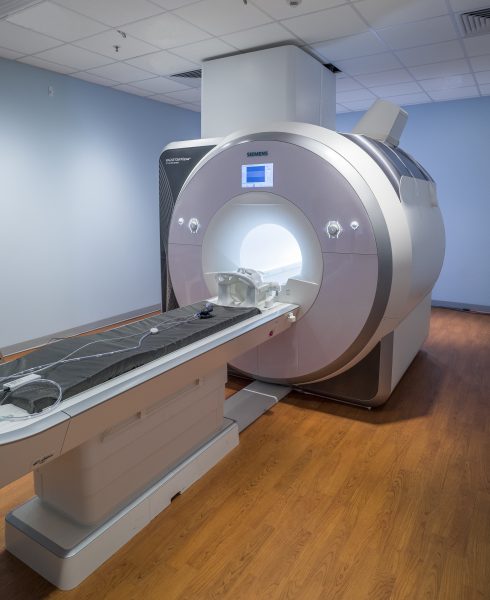 Preparing for a visit

Unless otherwise specified, no special preparation is needed prior to the exam, and you may follow your regular daily routine. You may want to avoid drinking coffee and other diuretics however, to reduce the need to use the restroom during the study.

You will need to sign two or more forms before you are allowed to participate. One is a consent form presented by the investigator performing the study, and will outline the expectations of the study. The other is a pre-screening form that makes sure that it’s safe for you to be scanned.

Wear loose-fitting, comfortable clothing, with no metal on your upper body (note that pants with zippers and rivets are fine). If your shirt contains metal or you are wearing an underwire bra, you may be asked to change out of it. In this case, you will be provided with a hospital garment to wear during the scan. Keep in mind that all jewelry and all electronic accessories must be removed prior to scanning.

In rare cases, certain types of makeup – especially eye liners and any makeup with glitter – may cause problems with the MR images. You may wish to come without makeup to avoid having to remove it for the scan.

People with the following implants cannot be scanned and should not enter the MRI area:

Please notify the researcher if you have other medical or electronic devices in your body because they may interfere with the exam or potentially pose a risk. Examples include:

Unless recently implanted, orthopedic implants pose no risk during MRI. Sheet metal workers and others who might have metal fragments such as shrapnel in their bodies (especially their eyes) may also require an x-ray prior to an MRI. Dyes used in tattoos may contain iron and could heat up during MRI, but this is rarely a problem. Braces are usually ok, but may distort the images. Very rarely, people feel uncomfortable, or claustrophobic, as a result of lying inside of the magnet bore. If you are concerned that this may be the case for you, please tell the investigator requesting your participation. Although there is no reason to believe that magnetic resonance imaging harms the fetus, the effects of a strong magnetic field on fetuses have not been fully investigated. For this reason pregnant, or potentially pregnant, women should not participate in the studies.

You will lie on the table extending from the MR scanner. An MRI measurement coil will be placed over your head and secured. Foam pads will be placed around your head to limit movement during the study. For better results you will be asked to hold very still – any movement, especially of your head, will seriously blur the pictures. Because the noises produced by the scanner are loud and may cause discomfort, all volunteers must wear ear plugs during the MRI scan; disposable ear plugs will be provided for you. Although you will be alone in the room, a loudspeaker and microphone will allow you to communicate with the researcher(s) running the experiment. For many experiments, you will be asked to lie still in the MRI scanner without performing any task. In other instances, you will be asked to perform a cognitive task. A typical task will involve presentation of images or words on a computer monitor or sounds through headphones. You may be asked to respond to certain stimuli by pressing a button pad.

During each scan you will hear rapidly repeating, loud thumping noises and will be required to wear earplugs and headphones to reduce the sound level during data acquisition. When the scan is finished you must refrain from changing your position or moving about. The researcher will let you know when it ok to readjust and make yourself comfortable. MRI and fMRI studies usually take 30 minutes to 2 hours, depending on the study. You may stop the scan at any time.